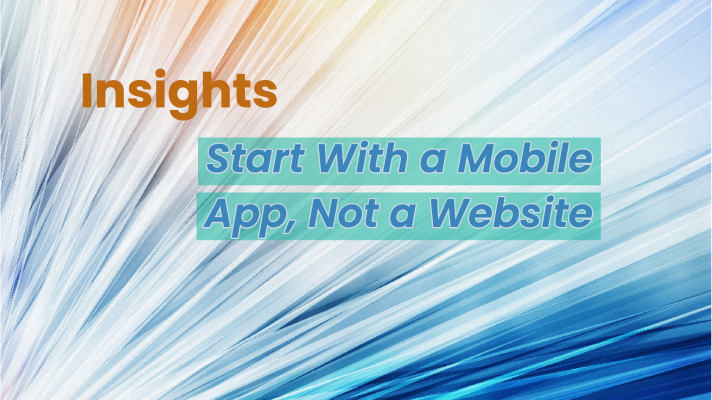 From my vantage point as a venture capitalist evaluating hundreds of early-stage startups annually, I’ve become puzzled why the vast majority of founders I come across are still choosing to develop their initial Minimum Viable Products (MVPs) via a website versus a native, mobile app. The data suggests they should not be.

According to eMarketer, over 88% of time spent on mobile is spent inside an app versus a web browser. It’s not just that startups are choosing to build their MVPs using a web application, but many are scaling well beyond their seed rounds and into their Series A or B round before ever getting around to launching a native, mobile app.

So what considerations should startups be weighing when deciding whether to be mobile-first and launch with a native app, or launch with a website? Let’s dive in with the help of some Twitter friends.

Advantages of a native mobile app

What are the advantages of launching with a native mobile app in a mobile-first world? The dominant consumption habit for the Internet is on a mobile device, and native apps have the most optimized user experience (UX) for mobile devices. But it isn’t just about user experience. The opportunity to drive re-engagement from device-triggered push notifications and home screen icons proved too much to resist for founder Alina Matson of Fitment, a new micro workouts startup.

From my vantage point, local push notifications are the #1 reason to launch a native, mobile app first, with clickthrough rates ranging as high as 12% to 40% depending on your category, according to insights shared by Andrew Chen of Andreessen Horowitz.

Email or other forms of reconnecting with users just do not come anywhere near as close as push notifications in terms of clickthrough rates. Also on the marketing front, you can receive additional visibility via App Store Search Optimization (ASO) in the App Store which you are giving up when choosing a website approach.

On the development front, there is easier access to other native APIs, although the differences between what you can and can’t do between a mobile app and website are fuzzier to me than ever given the advances in web technology. Finally, why not avoid costly technical debt and refactoring later in? When startups build for the web first, they start to compound technical debt which can dramatically slow down their ability to iterate later when they discover that the majority of their users want to use their application natively on their phone or tablet.

Advantages of a web app

Why would someone launch a website first? Launching a web app is often easier and faster than a mobile app. A founder may know very well that their user experience has more friction within a web app, however, as Maria Semykoz of Ukraine-based What’s In My Jar points out, the signal provided in a high friction web app can help to prioritize feature development for a more-costly native mobile app.

Web pages with rich content are more likely to rank higher in search results than content stuck inside a native mobile app. Marketplace startups like Omnia Fishing first launched websites because they knew a main driver of their go-to-market strategy could be ranking high in search results. Also, requiring your users to install an app versus just keying a website into a browser also can reduce initial trials, as Scott Resnick points out.

From a technical standpoint, there are ways to make the user experience more native now than when smartphones first hit the scene. There are web-wrapper products that can make a website look mostly native and minimize the poorer mobile user experience, which has historically been more common with websites on mobile screens, as Jeff Ericson of RubyRide points out.

Other considerations before starting to build

What are some of the other considerations founders should weigh when deciding between going truly mobile-first with a native app, or launching a mobile-optimized web app for your startup?

Since native mobile apps are generally more costly to develop as Derek Rucker points out, the ability for a founder to secure significant initial capital is an important consideration. Startups which are under-capitalized may want to opt for web-only launches. Also, if you do go the native app route, Derek points out that iOS is much simpler to launch on than Android. Android has so many more different device types, with different screen sizes, that it is easier to launch iOS-only than to design for Android.

An alternative to choice: The hybrid approach

Are you still finding it difficult to pick between starting with a native mobile app or a web app for your startup? You may want to take a hybrid approach, and launch with a native iOS app as well as a website like we are planning to do for our first venture studio startup, NextGem.

NextGem is a new social app for trading card enthusiasts to discover and share trading cards. Much of the core initial functionality for NextGem revolves around the use of modern, high definition camera features on the latest phones and tablets. It would be very difficult (if not impossible) to recreate the super high-resolution photo scanning of NextGem through a website.

These high-resolution photos are needed for trading card collectors who want the ability to closely inspect the condition of trading cards before purchasing or trading. The reason the NextGem team chose to also support a website view was for search engine optimization purposes primarily. Each scan of a trading card by a user leads to a new, search-friendly content page that can be easily indexed by Google.